PEDIGREE
Litter born at ST's Kennel April 10, 2007.
ST's "T" litter. "Star Trek" theme.
Because there were no girls in the previous litter and the arrangements to use a different sire did not work out, the dam's owner decided to try a repeat breeding.

Unfortunately, unlike the first time, this litter had a rough start and mom QT had to have a c-section due to a deceased puppy in utero who was thought to have a condition known as anasarca. Another puppy was lost at birth due to it's proximity to the deceased puppy and the only surviving male in the litter was discovered to have a cleft palate (also known to occur in litters with 'water' puppies) and did not survive, so there were four merle girls.

Anasarca is currently thought to be uncommon in cardigans and causes are still uncertain. This information is being provided with permission of the dam's owner and in keeping with Wyntr's ongoing policy of full disclosure for the benefit of all breeders. 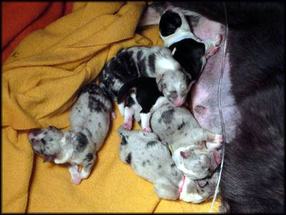 T'Pring (Harper) and T'Vera (Regan) went to wonderful pet homes. Trekkie went to live with her brother Starter from the ST's "S" litter, at Fairlane Cardigans where she produced two litters and is now retired, with no future litters planned by her owner.  Tiera was orignally kept by her breeder, but in 2012 came to live at Wyntr along with her mother QT.