Fudge and Dare were full siblings, acquired as pets from Janet Jackson of Airdrie Cardigans, with a start towards showing in Conformation and performance in mind. Fudge was shown at Fun Matches and once at the 1997 CWCCA National Specialty in Veterans where she was favorably placed in a large Veteran's class under judge, Mr. Peter Clifton and qualified in Obedience at the same nat'ls, where she completed her CD title.
Dare, a long-coated 'fluff' cardigan, took a bit longer to gain his CD and although he always managed to find a new way to DQ each time before finally achieving his title, he was quite the ham otherwise and loved to wear costumes when we went to Fun matches. Both were wonderful companions. Dare passed away at age 13 after losing his battle with hemangiosarcoma (cancer of the spleen) and his sister Fudge followed him a year later after a slow decline due to degenerative myelopathy and being diagnosed with terminal bladder cancer. Both were also diagnosed with hypothyrodisim by age 7. 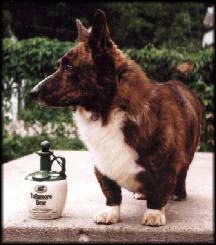 Our first show dog and Fudge and Dare's nephew, Tully, was also from Airdrie. His fiery coat color was not unlike the powerful whiskey of his namesake. A Link-Luc grandson, he was awarded at least a dozen Reserves in conformation as a puppy, but was retired from showing after he was diagnosed with OCD in his left elbow. He was a great showman during the time he spent in the ring and he loved going to shows. He completed his CD in obedience at the 1997 CWCCA National Specialty and was trained to advanced levels, but his bad elbow and a luxating patella prevented him from competing any further.

Unfortunately Tully had to be sent to the bridge at age seven when painful degenerative osteoarthritis, even with medication, made his behavior unpredictable and dangerous to other pets in the household. In all other ways, he was a joy to live with and few dogs could have been a more devoted companion. It was a hearbreaking decision and he is still dearly missed.