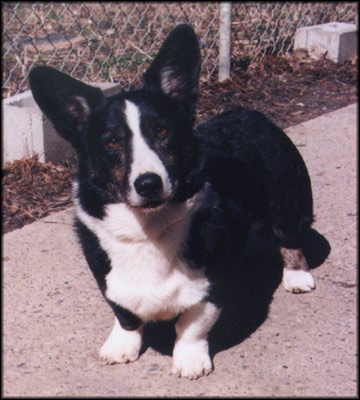 Bolt finished his AKC CH title at 10 mos with a total of 4 majors, including a 5 point Best of Breed over Specials. He was our first Champion.

Bolt's other accomplishments included 8 Best of Breeds and 1 Best of Opposite Sex over 10 shows in limited Specialing and achieving his UKC Championship in 3 consecutive shows. He was placed fourth in a large Puppy Sweeps class at the '97 CWCCA National Specialty. At 10 Mos old, he was awarded Reserve WD at the '97 CCCC National Specialty against mainly adult competition and unfortunately was just one point short of finishing his Canadian Championship when he was retired from showing.
At the 1998 CWCCA National Specialty, he was awarded Reserve Best Black Dog in the Champions only, Megan competition.
He was also awarded BOB at the UKC Premier (UKC's 'Westminster') three years in a row ('99 -'01) and had points towards his UKC Grand Champion title.
He sired only two litters in his lifetime and produced some outstanding puppies, including his daughter QT, who was awarded a Best Opposite in Puppy Sweeps at the 2001 National Specialty.  He is still avialable via frozen semen for select bitches.

At his last show outing before being retired from the ring, he was awarded Best Veteran at the 2004 CWCCA supported show in Berrien Springs, MI. He also earned a CD (Companion Dog) title in obedience and although he was never shown beyond novice, he was trained to advanced levels in obedience and agility.
Bolt had all the outstanding qualities that define cardigan type. Correct ratio, body type, size, a strong, level backline, angulation, outline, expression, handsome color & coat, the powerful, yet agile 'working dog's' gait, high intelligence, trainability and the excellent front typical of the Coedwig line. 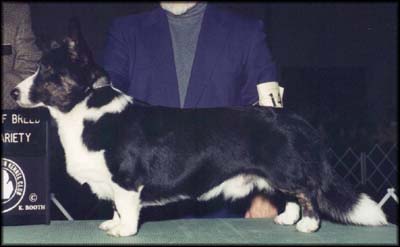 Unfortunately, Bolt began to experience seizures over the 2005 Christmas holidays and an MRI determined the cause to be a Meningioma (brain tumor). Surgery was performed by Dr. Isaacs at Animal Neurology Center in Canton, Michigan and Bolt went on to make an excellent recovery. Unfortunately, the tumor returned in May of 2006, so the difficult decision was made to let him go.

He is still missed.

At this time, meningiomas are not thought to be genetic in origin, but in the interest of full disclosure, this information is being provided. 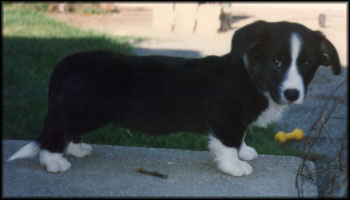 Bolt, 9 wks old.
Bolt was a half-brother to #1 ranked cardigan, AM CH Coedwig's Carbon Blue ROMg.
Many thanks to Kim Shira at Coedwig for letting us own this handsome, intelligent guy!