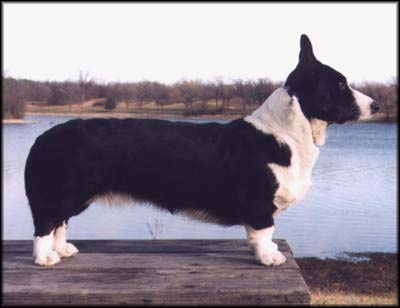 Beautiful, 21 mos old.
Beautiful and her brother Bastion are both from Wyntr's "B" litter.  She has many of her parent's best qualities including a wonderful temperament, excellent bone, outline, angulation and length. As typical of this line, she also had nice symmetrical markings and a lovely deep blue-black coat with correct texture, density and length.

In limited showing, she was awarded WB and BOS for a 4 point major at a Novi, MI show in January, 2003. At the Detroit Cobo Hall shows in March 2003, she was given a Best Bred-By Exhibitor. She went on to win her second major at the fall shows in Novi, MI and she was awarded Best Bred-By Exhibitor again both days at the Detroit Cobo Hall shows (March 19-20, 2004) where she also won a Bred-By Exhibtor Group 3! A big Thank-you goes to Judge Jim Ellis for his kind words about this girl. 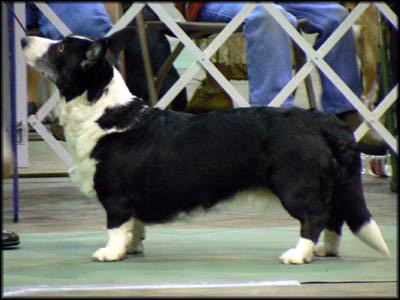 Beautiful at Cobo, 2008.
Beautiful added several more points in 2007, plus another nice win and BBE Group placement at Cobo in 2008.

She was 2 points short of her AKC Championship title when she developed mammary tumors at age 8, so she was retired from the ring to undergo surgery for them rather than risk her life just for show awards.  She took her mother's place as honored Matron of the household.
In early 2018  the tumor returned, and she went into organ failure soon afterward, so we had to bid a sad farewell to this wonderful girl on her 16th birthday.  She and Quick have been wonderful contributors to the Wyntr family. Gone on ahead, but never forgotten.