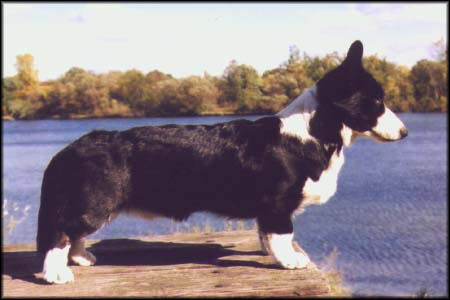 Bastion, 7 mos old.
Bastion was originally intended to go to a show/performance home, but due to an accident at 7 wks, ended up with a missing front tooth which pretty much disqualified him from any serious conformation showing and his high activity levels would not have made him suitable for the average pet home, so he remained here at Wyntr to train in performance. 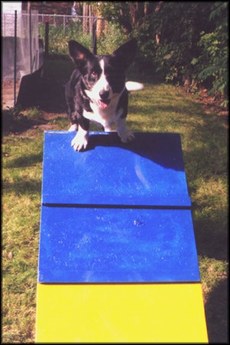 Bastion practicing on the mini-A-Frame at home.
Nicknamed Bas the Spaz for his boundless energy and enthusiasm, he showed outstanding talent in both obedience and agility training with more than one trainer describing him as having OTCH and MACH potential.  He was trained to advanced levels in both venues, but unfortunately tended to suffer anxiety attacks at shows, possibly due to PTSD still lingering from his accident, so was retired and became a much loved permanent resident at Wyntr.
Bastion remained healthy and active for his entire life, only declining his last few days due to age related liver and kidney failure, when we had to let him go.  Still missing his silly, quirky antics. 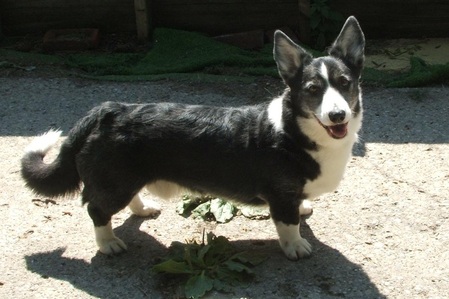 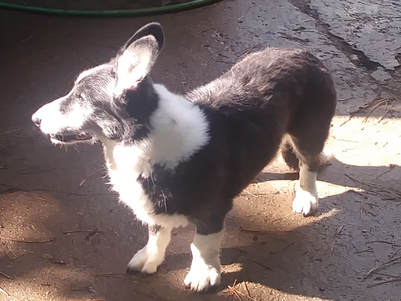 Out enjoying the sunshine during a warm August morning. One of the last photos of him, age 16 1/2.