Pedigree & Health Info
Cowboy's pedigree is a line-breeding which brings together top Welsh, UK and Finnish import lines in combination with some of the best established American lines. In 2005 at 12 mos old, Cowboy traveled with us to Wales and we visited many of the places where his breed originated. 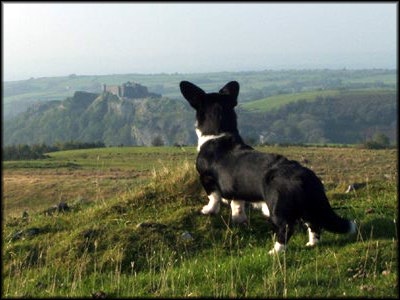 Cowboy at the same location where Animal Planet's Breed All About It episode on Cardigans was filmed. Carreg Cennan castle is in the distance. 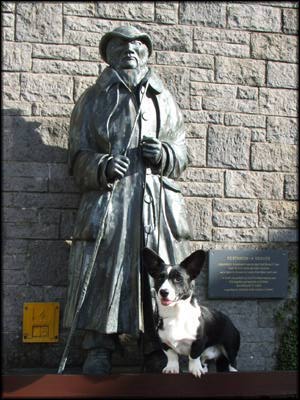 Cowboy standing with the Drover statue in Llandovery.
He has a nice outline, good bone and angulation, a handsome blue-black coat with a dark undercoat and excellent overall 'typiness' handed down to him from both of his parents. At his first shows he was awarded Best of Opposite Sex to Best in Breed (BOS) and Best of Winners (BOW). 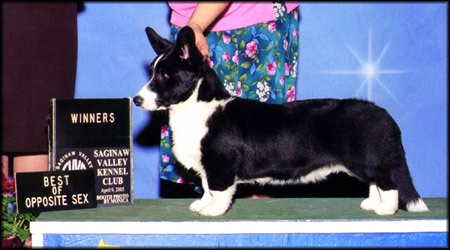 His first show and his first points, 6 mos old.
Unfortunately asymmetry in his front upper arms, which developed as he matured, has held him back in the show ring, but has not held him back when is comes to his athleticism and the joy he gives us in many other ways.
Sadly, Cowboy was never bred, and left us very unexpectedly following a seizure that was caused by a suspected brain tumor in April, 2018.  Until we meet again dear boy. 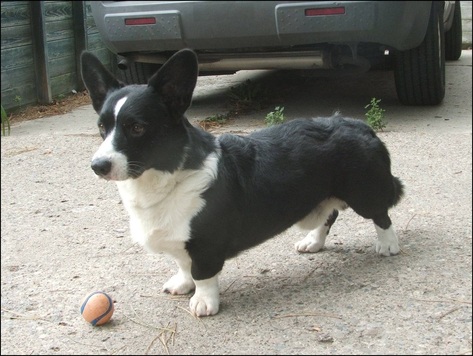