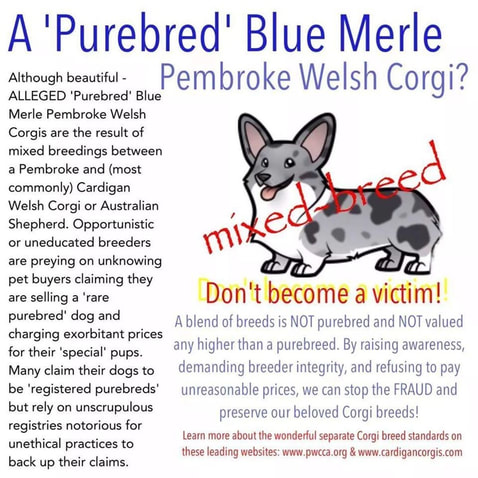 In the wake of the "Designer Breeds" and "Labradoodle"/"Doodle" trend, where it seems any two breeds are being combined and then touted as something better than their individual purebred parents (absolutely NOT true), there has also been a new problem with less than scrupulous people obtaining and breeding Pembrokes to blue merle Cardigans, dapple colored Dachshunds or even merle Austrailian Shepherds or Shelties, then docking tails of the resulting pups and calling them 'rare' merle pems.  This color is not rare and no matter what their breeder might say, they are NOT purebred Pembrokes or even purebred 'corgis' when this is done.  "Corgi' is just a generic descriptive word for 'dog', specifically a farm dog, the same as there are various breeds of dogs with generic descriptions as part of their name, such as hounds, spaniels, or terriers.

There is also at least one person who is producing these cross-bred dogs mainly just for their coat colors and calling them "American Corgis".  There is no such breed, again, these are mixed pembroke crosses.  It is basically a scam being disguised as "developing a new breed" and those who are producing these dogs do not have the best interests of the individual corgi breeds, or any other breeds they may be using, at heart.

Another important point to understand is that the merle color is dominantly inherited.  This means at least one parent MUST be a merle to produce the color.  This color does not occur naturally in pems and unlike Cardigans who can carry a gene called "EE" which can hide the merle coloration, Pems cannot have a 'hidden' version of he merle color.   Additionally, the foundation dogs used after the establishment of the Pembroke breed were not merles and the few who may have had the color during the earliest years when both breeds were shown together, were determined to not be entirely purebred, and were eventually gone from the breed by the 1940s. This means that the only real way to get the merle color in Pems is to breed them to some other breed and all that makes is an expensive mutt.

The same applies to the brindle color which is also dominantly inherited and was rare in early Pembroke foundation lines. The color may have persisted in one Pem family, but the last known case of a confirmed brindle in a purebred pem occured in the 1970s in Canada.  Current brindles have come from breeding to a Cardigan who was obtained deceptively and at barely a year old has been used for producing brindle pems without permission from it's breeder.

Because these merle (and brindle) pems are mixed breeds, they also cannot be legally registered with AKC or other qualified registries.  If a breeder of these dogs tries to say they really are purebred and AKC registered because they have a Canine Partners, PAL or ILP number, they are being deceptive.  This sort of number is only used so a dog can compete in AKC performance events and is no proof the dog is purebred or some sort of 'designer breed' approved by AKC in any way.  At least one breeder who is creating these corgi mixes has been making this form of implied claim.

There are also less scrupulous registries, often founded by puppy mill or volume breeder groups or even by pem-cross breeders themselves, who will register these dogs and call them by a cutesy  'designer breed' name instead of what they really are, deliberately produced mixes, so don't be fooled when the breeder of these dogs say they come with 'papers'.

Even if you never plan to show your dog and don't care about papers or even if the dog is purebred or not, please be aware that the main motivation of these people is making money.  If they are unethical about registration, then what else are they hiding?  NO ethical Cardigan breeder would appove allowing their dogs to be used for creating mixed breeds, so the Cardigans which have been used to produce these litters were probably obtained deceptively.  Buying a puppy from a breeder who has created these mixes is supporting their unethical behavior and potentially increasing the number of dogs who need rescue.  Typically breeders producing these pem mixes do not screen buyers, taking deposits from anyone and selling to whoever has the money to pay their price, even if the puppy is not a good match for their family.  Many of these improperly placed dogs have already ended up in rescues.  The adult dogs who were bred to make all these puppies also often end up dumped once they are too old or are used up from producing litter after litter and are no longer profitable.

"Home raised" claims may also only mean the mother is brought indoors to whelp the litter, then after 3-4 weeks, the pups are weaned and taken from their mother.  The mother is sent back out to the barn or some other outdoor kennel facility, along with all the other dogs being used for breeding, until she is ready to be bred again.  The breeder may advertise many upcoming litters while posting photos of some of their current or previous litters on social media or puppy seller's websites. After weaning, the puppies will also go outside to the barn, stall or kennel until they are considered old enough to sell, sometimes as early as six weeks.  Pups seperated too early from their mother and placed as pets at six weeks or earlier can often develop anxiety and/or other behavioral problems because they do not get the opportunity to learn social behavior and etiquette from their mother and siblings during those critial weeks after weaning .

"Health tested" may only mean the dogs were examined by a vet who only gave them a basic health check, vaccines and worming, not that their owner conducted any actual health screening tests such as DNA checks for DM and PRA, hip, elbow and patella evaluations or eye checks, to name a few.  Even those who may do testing typically don't know anything about the pedigrees or the relatives of the dogs they've obtained for breeding or understand the possible health, temperament and structural problems that might occur by crossing different breeds of dogs.  Some of these breeder are advertising "triple clear" DNA testing, but this can be deceptive since at least two of the three tests being used are not known problems in Cardigans, so the tests are only confirming what most breeders already know.  The third test, DM (Degenerative Myelopathy) is a worthwhile test to perform, but it is important to request proof that the test was actually done since many owners have sadly discovered the breeder actually didn't test, or wasn't truthful about results.

If you absolutely MUST have a merle, then please be prepared to wait, possibly up to a year or more in some cases.  Ethical Cardigan breeders are not 'volume' breeders who pump out litter after litter, breeding their girls to exhaustion just to put money in their pocket and produce a flood of poorly bred and potentially unhealthy dogs that ruin the reputation of their purebred parent breeds.

If you are impatient and decide to buy a merle pem mix anyways, be aware that you will be contributing to the problem.  As previously stated, if one parent or grandparent was a merle or brindle Cardigan, it was likely obtained deceptively and used  for breeding against the wishes of it's breeder(s).

And finally, two more things to consider.
First, the natural bob tail seen in many Pembrokes is extremely rare in Cardigans, so to get the 'bunny butt' look favored in pems, the breeder will have to remove the baby's tails by either docking (cutting off) or 'banding' (putting a rubber band tightly around the base of the tail to cut off circulation so it dies and falls off).  The 'bunny butt' look might be cute in pems, but for Cardigans removing their lovely tails is not cute, it is just a travesty! Further, if it is done improperly, it could mean a lifetime of problems with incontinence.
Second is that not all pups in a merle-pem litter will actually be merles and the others, sometimes even the entire litter, will usually just be 'ordinary' colors (tri or red).  These ordinary color pups will not only be less desirable, but will also be nothing more than cross-bred 'mutts' and if they aren't sold quickly enough before they lose their baby cuteness, may end up in a corgi rescue or dumped in a shelter or worse.

There are already far too many cute mutts (aka "Designer Dogs") waiting for homes in shelters and rescues, so why give money to support these corgi-mix/designer dog breeders who are just going to make more of them deliberately?